Ghoulish gals and ghastly guys, the witching hour is most definitely upon us. During the Halloween season, besides scary costumes and crazy make-up, where to go and how to celebrate it seems more important. If you haven’t come up with an idea, we have selected the best Halloween events around the world, starting from the classic parade to the spine-chilling adventure you might dare to give a try.

The famous West Hollywood Halloween Carnaval takes place on October 31 every year in Los Angeles, California. This event attracts more than 500,000 visitors. The parade, which runs along Santa Monica Boulevard between La Cienega Boulevard, could be one of the world’s largest Halloween celebrations. Big spider, witches, zombies, you’ll find all the stuff that meet your expectations for Halloween. There are also multiple stages on the official route with DJs, musical performances, shows and contests. Visiting a vampire? sounds like a plan. If you take a trip to the hometown of Dracula: Romania, where you can enjoy the most exclusive Halloween party, taking place in the famous vampire’s castle (Bran Castle) in Transylvania. This huge Gothic architecture stands on the top of a high hill and invites people to experience a hair-raising night, while offering an all-night-long party. You can go for a 7 days Dracula theme trip starts from Bucharest to Transylvania, which usually end up with the vampire visiting . The Halloween parade in Kawasaki, Japan on October 27, conjures up all the elements of nightmares as well as fantasies. As the biggest Halloween Event in Japan since 1997, this 1.7 km dynamic marching gathers all the spooky characters wearing the most creative and weird costumes. Ever seen the Girl with a Pearl Earring in a frame walking on the street? In this parade there are plenty of surprises to explore. Back to The Roots of Halloween
Edinburgh, Scotland

Do you know that the origin of Halloween is actually in Edinburgh, Scotland, where many Halloween traditional celebrations are still preserved? One of them is the Samhuinn Fire Festival on October 31, which takes place once a year on Calton Hill and will bring the Celtic New Year. With a dazzling mix of fire, drumming, acrobatics and immersive theatre, this event allows visitors to celebrate Halloween the way Scottish people did hundreds of years ago. Besides, you can also visit Edinburgh Horror Fest from October 24 to November 3, where over thirty various thrilling events ongoing. If you don’t want to get your spine chilled that much, or you want to celebrate Halloween with your family and kids, then there is no better place than Disney World! Mickey’s Not So Scary Halloween Party has become the most popular annual events that attracts lots of visitors in Disney World. With pumpkin decor everywhere, the park will be transformed into another world: The villains from classic Disney stories are coming back in a dark and spooky night, but along with loads of fun. You’ll definitely have a great time there, but be aware to get the ticket in advance. Besides the Disney World in Anaheim, other Disney resorts around the world, for example, Paris and Tokyo will also be good choices. 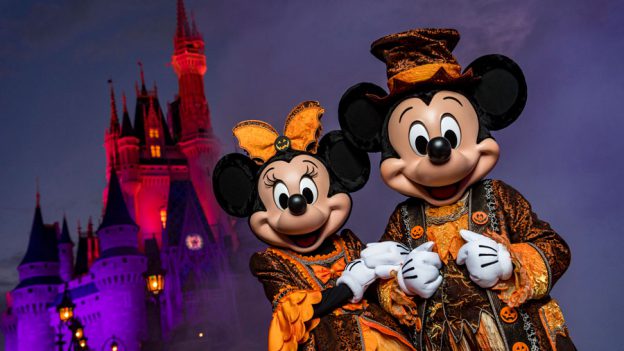 Determined where to go? Will you dress up like a vampire, pirate or Mermaid? Anyways, don’t forget to book your accommodation on Nestpick!